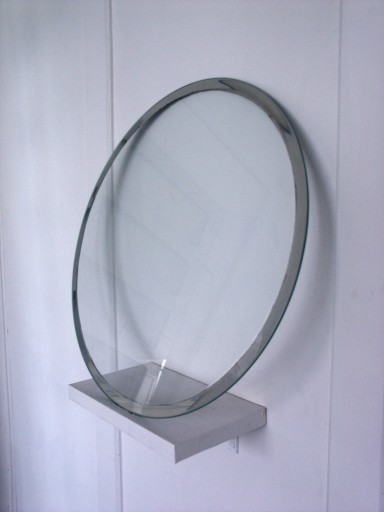 (Circular, bevel-edged mirrors, scraped of their reflective surfaces except for the bevelled area surrounding each one. One of these is resting on a small shelf, leaning against the wall at eye height when kneeling.) 7, each 400 mm circumference

The light throws a halo (for want of a better word) from these empty mirrors onto a surface behind you. And a shadow onto the wall behind it.

– Malevich’s black paintings, specifically when hung as originally in the corners of the room like icons.

Four times the keys of a personal computer are randomly depressed until an A4 sheet is filled . The first occasion with no punctuation, only the letters or numbers until the page is full. The second time introducing punctuation. The third time introducing the space bar. The fourth and final time introducing the tab key to start a new line. The four texts are then subjected to the spellcheck facility and where a word is suggested it is accepted. (Note, because of the infrequent and irregular occurrence of the typographical features which may define a word, i.e. punctuation and/or spaces, most sets of letters, although highlighted by the checker, did not have any alternative ‘words’ suggested). Once the texts had been corrected, each suggestion was increased in font size by one point and re-set in bold type.

The first page, remarkably (if it hadn’t happened might I have abandoned the whole project?) hit upon only one set of letters it could give a solution to. These happened to be my initials –K J. I don’t know what these letters might stand for in the computer’s lexicon (kilojoules I suspect), but they suggested the categories into which the subsequent sets of text should be organised– namely

A line of mirrors (dotted?) all around interior wall equidistant from floor and ceiling. Reflections – sun / dial / tropic movement.

Wall/floor tiles raised from floor and rising up the wall a similar distance in front.

*BEAUTIFUL CALIFORNIA (a picture book to remember her by) 2000

Relating to the Inferno project, a framing device (from the ladder series) applied to the pages of a colourful coffee-table book. Multiple images on the page, multiple spaces, texts fragmented (how text fragmentation and image fragmentation are qualitatively different), ‘unified’ by an imposed frame, and veiled by an over-printed other space / image (the ladder) which simultaneously neutralises, hides and reveals the given page spaces of the original.

The ‘bland’ and repetitive design and image placement of the original pages being simultaneously revealed and revelled in, to expose the arbitrary life of the partial image. Re-vitalising by means of a new frame, yet re-instating a new blank(et) bland template.

This final template re-states the Inferno template emphasising the ever-present availability of non-meaning.

Over-print text (non-text from different space ) to go further down this path? (the continuing metaphor of the planned journey)

The ladder coming from the roof of the circus tent in Ophuls ‘Lola Montes’ as referent.

Related to above but with overprint of picture captions from catalogue of paintings (for instance Chardin) – stating collection, location, dates, and photo credits.

By means of a fickle (blind) mouse the hatching and shadows of Goya’s Desastres de la Guerra are badly reproduced, only the darkness remaining.

A minute scribble (uncontrollable, invisible) is stretched from its arbitrary position on the page to fill the frame. A signature witness. Also Belshazzar series of indecipherable texts.

My binary narrative written in Istanbul in ’97, transcribed verbatim.

Reversed descriptions of either side of the paper, both over-printed on the same side, one backwards. (Meditation on the page – continuing series).

From and in ironic response to Ian Ha(MILTON) Finlay.

(Two mirrors or possibly just close-up pastoral images on two sheets of glass – not stripped but applied this time with the text removed from one and added to the other.)

The text which comes from ‘Paradise Lost’ Book IX, is the passage from a speech by Adam arguing that he and Eve should not separate in order to reduce their labours as together, within sight of each other they are stronger against the enemy. This text which itself comprises a syntactic opposition, divided between looking and being looked at, is itself divided between the two mirrors. (If images used instead of mirror, then image to relate to Green Park quotidian inferno piece.)

The photo paper itself functions as wall to the camera, the pinholes piercing it at regular intervals to project the image onto the emulsion opposite. Continuing meditation on the function of the page and positioning of ‘self.’

One photo, in its virgin state, of the table at the last supper in a version of Poussin’s painting but from the p.o.v. of Christ. The other photo a composite from the perspective of the painting, manipulated as Poussin would have, approximating to the original but with the empty barn through the open door where Christ would be.

As a riposte to the preposterously limited Martin Creed, whose lame whimsy insults even his own middlebrow, coffee-table conceptualist (with C. Parker) intelligence. A piece of blu-tak (alternative antecedent procedure – this blu-tak is used to remove the sky/background from a newspaper photo) is repeatedly cut in half with scissors until the project becomes hard to realise, (i.e. – Impossible to accurately continue) the final two pieces therefore being the same size as each other, mirroring the starting point, which has after all been consumed in the process. After Zeno.

Another riposte to Creed, but most of all a tribute to Gonzales-Torres. A stack of acetate sheets, completely blank, which can be removed by the public but which are only of their intrinsic value as sheets of acetate. The act of removing them is not only an act of complicity in the destruction of the piece (in fact it is stealing, not a gift). But an absolute equality of the piece and what it exactly is – nothing else. Put more clearly – as its value is precisely its value as a sheet of acetate – nothing distinguishes it from any other – the art only exists in multiple, but you can precisely duplicate it – its cost should be merely that – the cost of the piece. No specifications.

Bosphorous, Dardanelles, St Lawrence, Gibraltar etc. Waist-height box-like structures built from opposite walls of a passage and where the passage is wide enough, more of these structures divide the space, equally distanced.

At the exact centre of the gallery a row of ‘turnstile’ mock-ups (pre-placements) cross from one wall to the other, impeding flow of people in one direction and marking a meridian line in the other.

At each end of the line the name of the piece is attached to the wall. But the piece has a different name at each end – ‘Equator’ and ‘Impediment’